The City of Red Wing–home of the Plume and the Black Blob? 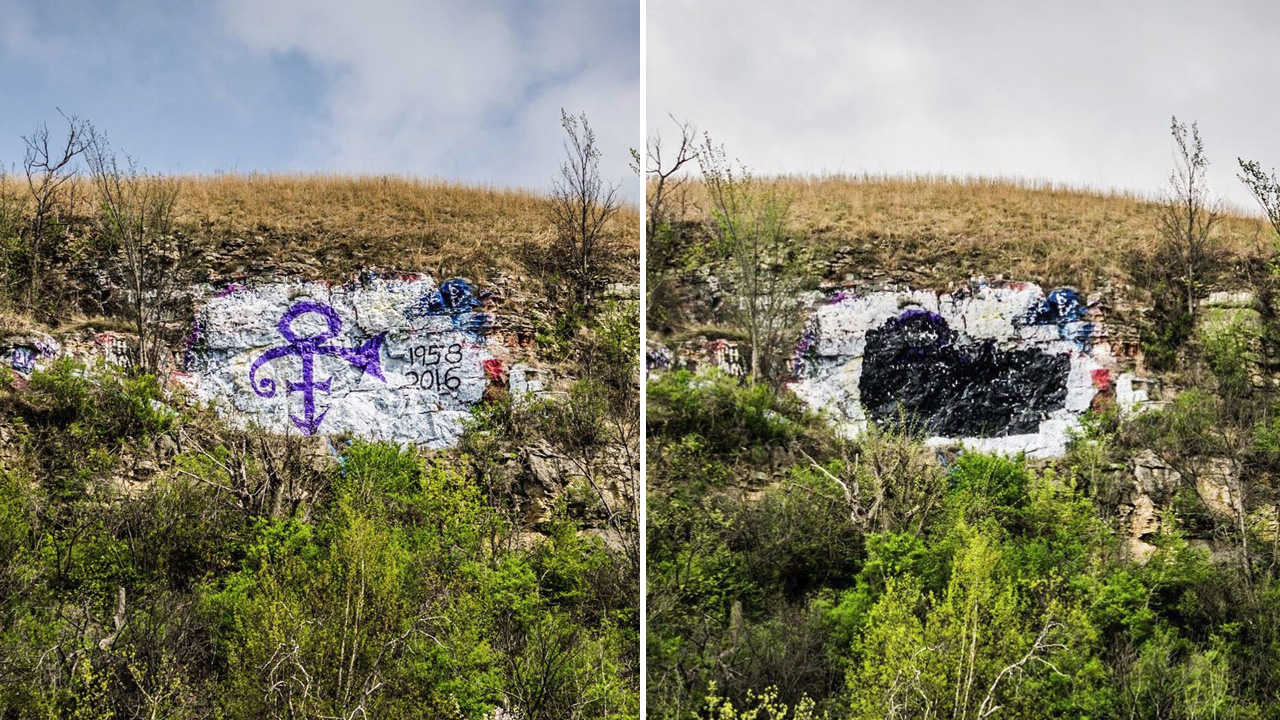 Prince memorial vs a Black Blob?  (of incinerator pollution?)

Overlooking Red Wing, Minnesota, is Barn Bluff, and on that bluff is a bald spot traditionally used for painting public statements to the community.  Usually they remain until replaced by another message.

Most recently, Prince Rogers Nelson, whose recent untimely death has touched the hearts and minds of Minnesotans, was memorialized as shown above.

After three days, and allegedly after one or two complaints, City employees painted a “black blob” (to me it looks like the top of a belching smokestack) over the Prince memorial:

Many residents were outraged.  One of the calmer Facebook posters said:

“Sad response from Red Wing, While the world shows their appreciation for all he did in silence you took the tribute down.”

Many saw it as an attack on freedom of expression.

“Our local citizens have been painting messages on that bluff for over 50 years. They have mourned losses. Expressed there love. Proposed marriage. Celebrated their graduation. People have expressed whats on their minds and in their hearts up on that bluff since 1959. Its been a part of our history and what has made Red Wing so great. We are in America and have expressed our free speech on that bluff since i can remember. History has already taught us no matter what gets painted up there it wont last long before someone paints something else. It wont be long and it will be painted again. Stop the city from intervening. Leave the bluff paintings be. Show your support by attending the meeting on May 12th and tell the city how you feel about them covering up a city tradition the locals have cherished.”

Mainstream media coverage has been extensive.

Red Wing officials did not respond to my inquiry, but according to this media outlet the initial response was authoritarian:

At the moment, the Prince memorial has been repainted and I have not heard of any arrests.

Notice the uncanny resemblance of the Blob to Plumes

… from these, the Xcel Energy garbage burners that sit under Barn Bluff:

Coincidence?  Not really.  Since the early1980s–I kid you not–Red Wing officials have campaigned to force all the garbage generated in all of Goodhue County to be burned in Red Wing.  They have hired lobbyists, paid dues to incinerator industry trade associations, pressured regulators, and been in court over it multiple times.  State legislators from the area have supported the schemes without seeking other points of view.

Now, after all these years, they are scenting victory–the Commissioners of Goodhue County seem prepared to bend their knees to the Red Wing/Xcel Energy (The Minnesota “Pollution Control Agency” is also a major bad actor.)  incineration scam made possible with “Renewable Development Fund” dollars.

So far as I can see they care nothing–nothing!–for the effects of the increased health-damaging incinerator pollution on Red Wing residents.  (Details here:  Xcel Energy garbage burners belch out pollutants in Red Wing, Mankato, and La Crosse.)

In general, environmental awareness in Red Wing seems very limited–perhaps a legacy of being an Xcel “company town.”  When will this change?  When the public gets informed, aroused, activated, organized….

Red Wing, “Pretty Red Wing,” is a picturesque but troubled city much in need of reforms.