This is the promised further detail on the “mega-horrible” bills being heard in a Senate committee at 4:00 pm this afternoon (Thursday, March 19th.

For the utility “deregulation” bills

see Carol Overland’s Legalectric.org post, “the problems with SF 1735″ .  Overland has been practicing utility regulatory law for a long time and knows the history behind the present scams.  This is complicated stuff that just can’t be reduced to sound bites, but here are two anyway:  (1) Utilities, expecially Xcel Energy, can pretty much afford to buy off everybody, and (2) Nobody in Minnesota government or politics seems to be publicly standing up for ratepayers, the environment, or the public interest.

[Note:  There is a “delete-all” amendment to S. F. 1431 which we received at 10:30 pm.  This new version does not seem to correct any of the problems people are objecting to.  It has new sections, some of which seem to raise new concerns.]

[Update:  The AG’s office DID appear at the hearing and oppose both the original bill and the delete-all amendment.  Kudos to Lori Swanson.]

S.F. 1431, authored again, by of all people, Sen. John Marty, would increase incentives for incinerating trees and garbage in the name of “clean energy.”

It has been reported to us that this bill originated in the Minnesota Department of Commerce.  We can’t confirm that one way or the other.

There is no question that Minnesota’s incentives for wind and solar and efficiency (conservation) should be made more effective.  In 2014 Minnesota ranked 27th in installed solar capacity, down from 24th in 2012 and below Delaware and Vermont.  At the same time, Minnesota was 27th highest in per-capita electricity consumption and 18th highest in total energy consumption per capita.  [Note:  A typo in the original version of this post had Minnesota as the 7th highest, not the 27th highest.]

Of course, climate and other factors influence these numbers, and not all sources agree, but in my opinion a key factor is that policy in Minnesota, and public perception of that policy, has been effectively manipulated by special interests, especially Xcel Energy.  Efficiency programs, and solar installation, have been kept at token levels by utilities wanting to greenwash their images without actually losing sales.  Utilities can obstruct and drag their feet with some confidence that energy entrepreneurs, who need utility cooperation, won’t do much public complaining.

Cost-effective rooftop solar is a game-changer

Utilities have been pushing back hard.  See this post, for example:  [Wash Post] “Utilities wage campaign against rooftop solar,” and more on this in Grist today: “Utilities experience competition, don’t like it, run crying to regulators.” But, a key theme of these stories is that utilities are running to regulators, such as the Minnesota Public Utilities Commission, because they are encountering public opposition in state legislatures.  In Minnesota, it looks more like Xcel is running TO the Legislature after not getting all it wants, as fast as it wants it, from the MPUC.  What does this tell us about the Minnesota Legislature?

The real deal is that wind only works at relatively large scale, which utilities inherently can control–buy wholesale and sell retail.  Solar works at large scale, but it also works at rooftop, “behind the meter,” utilities-can’t-control-it scale.

So, we need to look at energy bills cautiously, asking ourselves if they are for real, and whose interests are actually being served.

This bill requires that a quota of “total retail electric sales to retail customers” come from “eligible energy technologies.”  The bills seek to increase that quota to 40 percent by 2030.  As of now, the quotas are 12 percent for some utilities and 18 percent for Xcel Energy, scheduled to rise to 17/25 percent in 2016.  (Xcel has, in effect, been given higher quotas as punishment for owning two nuke plants.)

The problem lies in the definition of “eligible energy technology:”

(3) hydroelectric with a capacity of less than 100 megawatts;

(4) hydrogen, provided that after January 1, 2010, the hydrogen must be generated from the resources listed in this paragraph; or

(5) biomass, which includes, without limitation, landfill gas; an anaerobic digester system; the predominantly organic components of wastewater effluent, sludge, or related by-products from publicly owned treatment works, but not including incineration of wastewater sludge to produce electricity; and an energy recovery facility used to capture the heat value of mixed municipal solid waste or refuse-derived fuel from mixed municipal solid waste as a primary fuel. [emphasis added by Miller]

Most of the categories in item (5) are much dirtier than fossil fuels, even including coal.  Emissions of both climate-changing gases and health-damaging air pollutants from these sources are very high.

These sources are also very expensive, and power purchase agreements with Minnesota utilities for Dirty Burner Power are typically high, but hard to pin down as the numbers are kept confidential (wonder why?).

Look at this, for example, based on date from the US Department of Energy: 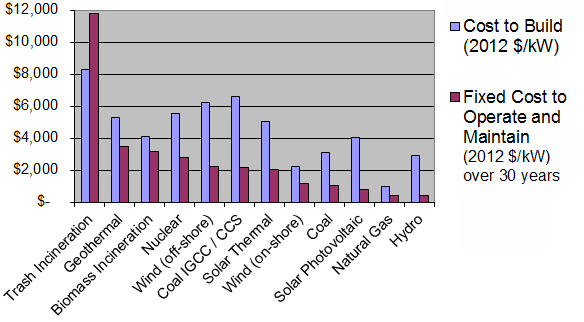 Of course, people argue that “biomass” is “carbon neutral” because the carbon dioxide released by burning a tree is taken out of the atmosphere when a new tree grows up to replace it.  This argument may seem plausible until one realizes that it takes only a few minutes, at most, to burn up a tree and it takes decades to grow it’s replacement, even if that is allowed.  Even biomass promoters are being forced to admit that if carbon neutrality is ever achieved, it will be decades off in the future from the initial act of incineration.

“Biomass” incinerators in Minnesota also have a horrible record of permit violations.  Perhaps the most notorious example is the Fibrominn turkey litter incineration in Benson, the first such burner in the US because other states, including Delaware, had the sense to “just say NO.”

So why then are Senator Marty and his colleagues  seeking to increase incentives for expensive and dirty burners, especially when conservation (efficiency), wind, and solar are clean, cheap, and readily available in Minnesota?  That would be a good question to ask them.

My answer is that these Dirty Burner industries have their hooks deep into Minnesota, including its “environmental community.”  For example the membership of  the Minnesota Environmental Partnership (MEP), a promoter of S. F. 1431, includes Dovetail Partners, a front for biomass incineration interests.  On the other hand, when St. Paul based Neighbors Against the Burner (NAB) wanted to join MEP they were told to go away.  (NAB has had a string of successes, a recent one noted here.)

From the MN Department of Natural Resources we get:

Using wood for energy is a way to support local economies and forest management.
DNR received a $250,000 grant from the U.S. Department of Agriculture to enhance the use of renewable wood energy systems throughout the state.

But even these folks admit:

“All but the very best wood burning systems [actually, all without qualification] , whether in buildings or power plants, have significantly higher PM [particulate matter] emissions than do corresponding gas and oil systems. For this reason, it is necessary to use a stack with a height that will effectively disperse emissions into the air [emphasis added by Muller] and reduce ground-level concentrations of PM (and other pollutants) to acceptable levels.”

Thanks to Darlene Huss for a heads-up on some of this stuff.

For some recent testimony on the shameful role of the Minnesota Pollution Control Agency (MPCA) in promoting garbage incinerator pollution go to this post: “Garbage prospers in the Minnesota Legislature.”  I will only add here that many studies have shown that the way to save energy and materials is in source reduction and recycling, NOT incineration.

So the solution here is really simple enough:  Only increase quotas for wind and solar, and phase out all the quotas for Dirty Power such as garbage and biomass–Item (5) above.

This appears to say that 24 percent must be wind, only 1 percent can be solar, and 5 percent must be Dirty Power.  This makes no sense at all as a matter of sound public policy.

One more important item (This appears in the delete-all amendment but not in S. F. 1431 as filed):

The often discussed energy savings goal of 1.5 percent per year is, on it’s face, increased to 2 percent.  But look at this wording:

Energy conservation improvement may include waste heat that is recovered and converted into electricity, but and may include electric utility infrastructure projects approved by the commission under section 216B.1636.

In other words, the theoretical quota is increased but is no longer limited to helping customers save energy.  NOW it would be able to include ordinary improvements in utility infrastructure that are already being paid for by ratepayers.  Read this as “no lost sales plus double dipping.”

Is this good public policy?  Is it progress?  Is it what supporters of the “Clean Energy and Jobs Campaign” think they are advocating for?